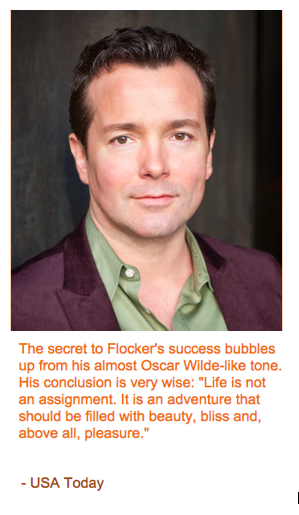 Michael Flocker has now worked in the internet, publishing and television industries for fifteen years beginning as a writer, photographer, editor and then managing editor at AOL CityGuide. From there he went on to become editorial director at PlumTV, and subsequently moved on to NBC Local Media and LXTV as lifestyle managing editor. He was then cast as one of three co-hosts of the NBC entertainment program LX New York.

Subsequently, he worked as the managing editor of a lifestyle vertical at The Huffington Post, as a program manager for a multi-million-dollar ad campaign with the AOL Custom Solutions Group, and as a communications and marketing specialist for the publishing house of Houghton Mifflin Harcourt. He also works as a freelance content creator and editor,  and his clients have included The Redbird Group, Main Event Media and Hugh & Crye.

He is a best-selling author of four internationally published books, and his writings have appeared in The London Sunday Times, The Guardian UK, Details Magazine, Where Magazine, Elle Decoration UK and other publications.

This is a text widget. The Text Widget allows you to add text or HTML to your sidebar. You can use a text widget to display text, links, images, HTML, or a combination of these. Edit them in the Widget section of the Customizer.